You are here: Home / Breaking News / Flag raised to honor a friend

PLYMPTON — Plympton Selectmen, firefighters, police, Boy Scouts and the community honored the memory of Diane Giordani, along with her German Shepherd, Blitz, in a ceremony Monday, June 17 in front of Town House. Giordani and her dog were killed in a violent head-on crash with a pickup truck, driven by a drunk driver on County Road, Route 106, a year ago, on May 10, 2018,

Brian F. and Elizabeth Hamlet, of Sheffield Park, donated an American flag to the town in Diane Giordani’s memory.  The Hamlets are neighbors of her widowed husband Michael Giordani and told the town they will replace the flag as necessary in perpetuity.

The last flag in front of the Town House was badly in need of replacement.

About two dozen people attended the flag-raising dedication and ceremony, including Michael Giordani, Diane’s sister Stephanie O’Leary along with her husband Brian. Other family members and friends were in the audience as well. Eagle Scout candidates landscaped around the flag pole prior to the ceremony and were seen saluting as the flag was raised.

“The ceremony was wonderful. It just shows you it doesn’t stop around here, the love for her, it just keeps coming. I didn’t know until hours before who had donated the flag. I’m surrounded by incredible people right now,” said Michael Giordani. “Things that used to be important are not … I try not to let things get to me. It’s all about Diane.”

“I try to do a good deed every day, [he volunteered] and it comes back tenfold, there’s an awful lot of love out there,” he added.

Michael Giordani reminisced about how Diane Giordani raised rabbits while she was young in the 4H club, and even won a national award with a breed of rabbit as an adult. For him, rabbits are a sign of his late wife.

Giordani enjoys hot rod shows and traveling to the Adirondacks to visit Lake George, where he visited with Diane, and described an experience while taking a recent trip there. “Out of the woods came a rabbit about 10 feet away from me, and it stayed and it stayed and wouldn’t move, and I lost it, so you never know where’s [the grief] is coming from.”

Justin Kilburn, 30, formerly of Links Way, Kingston, was found guilty of one count of Motor Vehicle Homicide by OUI, May 8, 2019, in Plymouth Superior Court at Plymouth nearly one year after causing the fatal collision.  He was sentenced to five to six years in prison by Judge Cornelius J. Moriarty, II.

Kilburn had a blood alcohol content level of 0.17%, more than twice the legal limit, when he caused the collision, said the district attorney’s office, and this was not his first alcohol-related driving offense according to records.

Kilburn is currently incarcerated at MCI-Cedar Junction in Walpole.

“He got five or six years, but we got a life sentence … you have to move forward, I guess,” said Michael Giordani. 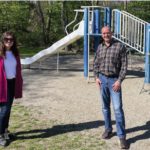